This site uses cookies to help understand how you and other visitors use the site. You can see a list of these cookies, and what they are used for, on the cookie information page.

Main body of the Cairngorms, east of Glen Feshie, north of the Geldie burn/River Dee.

This is the southernmost corrie of the Bheinn a'Bhuird corries.  The south east facing headwall offers some pleasant skiing with many variations in line possible.

The remote Coire Cath nam Fionn is the main attraction of this mountain, offering 3 very obvious gully lines on Bheinn Bhrotain, and the potential for some interesting skiing on the face below Leac Ghorm on Monadh Mor.

The steeper lines of Coire Sputan Dearg are described separately, and whereas the descents from Ben Macdui to the South and West are maybe not as steep, they are certainly much bigger.  It wouldn't be right not to mention them!

The large dome of Ben Macdui is a popular snow sure tour from Cairngorm and back.   Even in lean snow conditions, it's often possible to descend any of the 3 lines described.  The hanging corrie between the Allt a' Choire Mhòir and Allt Clach nan Taillear also gets skied, with a significantly steeper entry than the other 3 lines described.

Sandwiched between the more popular, and arguably more impressive, Garbh Choire Mór and Coire Bhrochain, Garbh Choire Dhaidh doesn't offer the same defined lines that its more illustrious neighbours do.   Catching the sun more than it's neighbours as well often leads to poorer snow snow conditons, but it is a beautiful secluded place to visit, made all the better if a descent is involved.

Despite there not being many defined lines, theres is one reliable gem: Monolith Gully.

Tucked high below the main summit of Braeriach, this corrie can hold onto skiable snow well into late spring/summer, despite it's generally southerly aspect.  There are 3 obvious, and relatively popular lines, but others are possible.   West Gully is the steepest and widest of the 3 main gullies.  East is the easiest angled, but narrowest of the main gullies.  Central Buttress Gully is the most interesting.  All 3 are superb in the right conditions.

In contrast to neighbouring Coire an t-Sneachda, Coire an Lochain is small and enclosed.  The short buttresses that sit high above the lochan are home to many hard miixed winter climbs, separated by much easier gully lines.  The Couloir is the obvious ski descent, but there are rumours The Vent being descended (a very steep narrow slot to the East of The Couloir), and the right branch of Y-Gully gets talked about (to the West of The Couloir, usually topped by a massive cornice).  Both are likely to be utterly terrifying.

Coire an t-Sneachda is almost certainly one of the most popular gully skiing locations in Scotland due to the proximity to the Cairngorm ski area.  It's also a contender for the most popular winter climbing area in Scotland as well, and as a result, it can be very busy in the gullies!  The best time to ski the lines are late in the season when the corrie is quieter, or late in the day to avoid the majority of the crowds.

Easy options into the corrie include the west facing descent from Windy Col (at NH998036), or "0.5 Gully", a shallow northeast facing gully between the head of the col above the Goat Track, and Fiacaill Buttress on Cairn Lochan at NH990028.  The slope taken by the Goat Track can also give a good short descent in the right conditions, and is steeper than nearby "0.5 Gully".

The relatively low lying and remote Coire Etchachan may not spring to mind when thinking of ski locations in the Cairngorms.  However, it is home to a wee gem in the form of Forked Gully, and is definitely worth a visit.

The Loch Avon basin is a fine place to ski, offering easy uncomplicated descents down relatively wide gullies.  It's a popular area for skiing, due to the proximity of the ski area at Cairngorm which makes access easier.  As a result, you can easily combine several descents in a day. (e.g. from the car park over to the top of Stag Rocks, down Y or Diagonal Gully, then up onto Carn Etchachan and down either Castlegates or Pinnacle Gully, then up Coire Domhain and down Alladins Couloir in Coire an t-Sneachda).  Hells Lum, the gully that gives the cliff the same name, has been skied and is a different proposition to the other gullies described, being steep and narrow.

The high points of "The Feshie Ridge", Sgòr Gaoith and Sgòran Dubh Mòr, are home to some justifiably popular skiing on the West face above Glen Feshie.  A direct descent from the summit of Sgòr Gaoith is a fine way to end your day on your return to Glen Feshie, and "Tom", "Dick" and "Harry" are classic easy angled gully lines in Coire Gorm, below Carn Ban Mor.  Apart from the low lying chutes on Creag Mhigeachaidh which are occasionally in condition, the skiing on this side of the hill is amenable and reliable

In contrast, the vast Eastern face above Gleann Eanaich is riddled with gullies and ridges, and on arrival from Glen Feshie, it can feel like you are looking down into another world.  The descents here are exciting and commiting, requiring sound judgement to get the right conditions.

The summit gullies of Sgòr Gaoith are set above the loch, with complex rocky ridges separating the lines.  Gasps of "This doesn't look like Scotland" have been heard whilst looking into the various lines!  The gullies below the col between the 2 summits require further exploration, but are generally more amenable.

Coire Olc (with "Olc" possibly aptly meaning "anger" or "evil") is a foreboding place.  Also known as "Fan Coire", 2 large triangular buttresses guard the lower slopes, with a gully passing between them that runs the full height of the face, passing between 2 rocky buttresses within the corrie higher up.  This is "2/3rds Gully", named because the lower section is rarely in condition.  When it is, it banks up to a Grade I climb, and if you could get into it, it would be by far the biggest vertical gully descent in the Cairngorms.  2 lines have been skied either side of the central line, both worthwhile in their own right.

Just to the North of Coire Olc is Coire Sgòran Dubh Beag, which arguably looks even more like a fan (of the paper variety).  With several shallow, relatively amenable gully lines, there's plenty of choice.  Lastly, the prominent buttress below Sgòran Dubh Beag is split by the striking line of the Willow Spout. 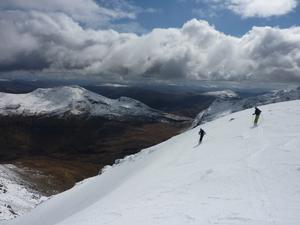