The approach up Glen Quoich is the most direct, but means the shortest route back involves an ascent out of the corrie which may result in a longer outing.  The Gleann an t-Slugain approach is the most logical, and if conditions allow, you could cycle to within 3km of the corrie.   Naturally, if snow cover allows, you should be able to descend at least some of the ascent below the corrie on ski.

During the summer of 2014, significant rainfall resulted in sections of the Quoich Water changing course. As a result, sections of the track and hillside in Glen Quoich were washed away!

This can often be the only cornice-free section of the corrie.  Facing south, it softens in the sun, so a decent run to do in the spring after a frosty night.

North side of the promontory

This descent takes the slope on the north side of the rocky promontory that divides the corrie into 2 lobes.  This area can sometimes have a reasonable break in the often sizeable cornices ringing the corrie.  Once on the upper slope, it's a case of ensuring you head for the shallow gully half way down the slope.  From the exit of the gully, you can traverse skiers right towards the promontory and then descend, or head back into the corrie on skiers left.

Notes:
Related Links:
A report on Winterhighland of a descent late April 2010

The headwall at the back of the North lobe of Coire Nan Clach often sports a huge cornice, but it can be smallest where the corrie rim turns Northeast, next to a rocky outcrop.  As with the other corrie runs here, the top is the steepest section, then easy skiing to the corrie floor follows.

Headwall of the South Lobe

There are several option here for a descent, and it really is a case of finding the smallest cornice.  There are at least 3 obvious lines in the back wall, each defined by short shallow rocky ridges.  The entries to each will usually be easiest at the Northern end of each of the entry points. 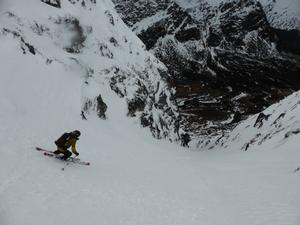