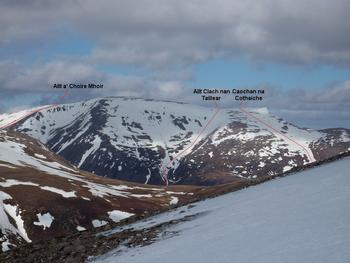 The steeper lines of Coire Sputan Dearg are described separately, and whereas the descents from Ben Macdui to the South and West are maybe not as steep, they are certainly much bigger.  It wouldn't be right not to mention them!

The large dome of Ben Macdui is a popular snow sure tour from Cairngorm and back.   Even in lean snow conditions, it's often possible to descend any of the 3 lines described.  The hanging corrie between the Allt a' Choire Mhòir and Allt Clach nan Taillear also gets skied, with a significantly steeper entry than the other 3 lines described.

The ski centre car park on Cairngorm is a popular starting point, and is feasible for descents of Taillears or the Allt a' Choire Mhòir, but less so if you intend to descend the line of Coachan na Cothaiche.  Using a mountain bike and cycling from Linn of Dee to Luibeg makes the Southern approach much more appealing.

Apart from being a bit of a mouthful trying to pronounce the name, this is a fantastic, fairly snow sure descent despite its southerly aspect.  If you don't fancy trying to pronounce it, you could use the translation, which is "burn of the froth", or even better, the frothy burn. From the top of Ben Macdui, you should be able to get a full 600m of descent, even after a considerable thaw.

The large shallow bowl below the Sputan Dearg-Macdui col is very easy angled, but just watch out for big holes during a thaw!  Head for the outflow of the bowl, staying just right of the stream line.  Even if it is a bit patchy with heather showing through, stay on the right hand side and keep going.  As the angle steepens, you should then be presented with a long tongue of snow forming the West bank of the stream line that reliably offers a descent to the 700m contour.

Taillears Burn is a popular target for folk with touring kit.  Sitting on top of Ben Macdui, having toured from the ski centre, it must be really tempting for many to descend it.  Those that do face a considerable walk/skin back out, but it's worth it.  If you have approached from the South, you face a long trek round the good path below Can a' Mhaim, but again, it's worth it.

The now out of print 1987 SMC guide to "Ski Mountaineering in Scotland" describes the descent as "one of the finest and most challenging ski-runs in the Scottish mountains".  In the context of the other lines described on this site, the "most challenging" aspect of that statement may not hold true, but it is a fine descent!

The descent can be split into 3 distinct sections: the upper bowl contains the steepest section before opening out onto a wide easy angled area, followed by a narrow cornice lined stream line descent.  After a thaw, or late season, the lower section can appear broken.  The snow will be more obvious on the right hand side of the stream, and a deviation into the bed of the stream itself may be required (assuming there's snow in it!).  It's often beneficial to return to the right bank soon, as another strip of snow often persists on the right bank quite low down.

A fine big descent into the Lairig Ghru that can be started from the summit of Ben Macdui.  The easy angled turns into Coire Mòr allow the legs to warm up before dropping into the main line.  The bank on skiers left often holds the most snow. 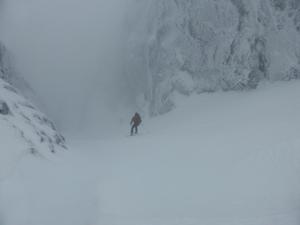