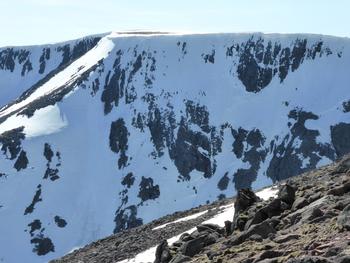 Sandwiched between the more popular, and arguably more impressive, Garbh Choire Mór and Coire Bhrochain, Garbh Choire Dhaidh doesn't offer the same defined lines that its more illustrious neighbours do.   Catching the sun more than it's neighbours as well often leads to poorer snow snow conditons, but it is a beautiful secluded place to visit, made all the better if a descent is involved.

Despite there not being many defined lines, theres is one reliable gem: Monolith Gully.

As per Cairn Toul and Sgor and Lochain Uaine, you can approach from the south via Coire Odhar, skirting the summits of Cairn Toul and Sgor an Lochain Uaine, or follow the Lairig Ghru and then into coire itself, passing the Garbh Choire Refuge. From the North, the best approach is to cycle up Gleann Eanaich and either ascend Coire Dhondail to the plateau, or use the Escalator (shorter). The down side of this approach is that you must climb back out of the corrie again no matter what.

The blunt ridge between Garbh Choire Mór and Garbh Coire Dhaidh offers an easy way out of the corrie, if the headland isn't sporting a decent sized cornice. Depending upon snow cover in the corrie, you may need skirt the base of steep Northeast facing ground below the ridge to get onto it.

On the North side of the corrie, and attractive South facing bowl looks worth doing, but it loses its snow relatively rapidly late in the season. The slope between it and Coire Brochain gives an unsatisfying ski, and can even be corniced. Just to the South of the falls of Dee is a narrow line, bounded on skiers left by a rocky rib. A partial descent is known about, having been mistaken for Pinnacle Gully in neighbouring Garbh Choire Mór (and probably should be named "False Pinnacle Gully", or similar).

From the summit plateau of Braeriach, most peoples eyes will be drawn to the impressive North facing wall of Garbh Choire Mór when looking South. They might not notice the headland between Garbh Choire Mór and Garbh Choire Dhaidh. However, facing them is the shallow line of Monolith Gully.  It's reliable, due to its aspect, and is a really good descent.  The cornice can be considerable directly above it, but it is usually possible to slide in next to some rocks (if they are visible), just to the South, and cut back into the top of the gully.

The gully itself is shortlived, but the big open slope below compensates for that, allowing for fast turns to the corrie floor.  Well worth doing!

Notes: Relatively easy for Grade I 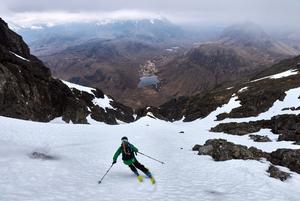