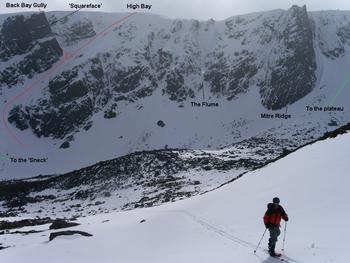 Although not essential, use of a bike from either direction will make both ends of the day easier.

Tomintoul / Corgarff approach:  This involves a fair bit of ascent and descent on the bike (both directions) before you set off on foot from the footbridge on the River Avon at NJ126059, particularly if you park at Corgarff.  The path from the footbridge up Slochd Mor into Garbh Choire is indistinct, and easily lost.

Glen Quoich approach:  You should be able to cycle to the foot of the An Diollaid spur, although if the river crossing is difficult you may have to leave the bikes there.  You can either walk or skin up An Diollaid (usually snow on the east side of the ridge), arriving on the plateau at the head of Coire an Dubh Lochan.  This approach may be preferable if you don't like cycling uphill too much with skis on your back, but it does mean that you will expend effort to get back onto the plateau for an easy run down (which may be welcome!).

Gleann an t-Slugain approach:  The landrover track from Keiloch is cyclable all the way up to the head of the glen, except for a couple of short steep sections.  It is worth pushing the bike up these if there is minimal snow cover.  Once over the top, there is a new path up the glen.  It is also cyclable for another 2.5km, if you don't mind some drainage ditches.  This approach means that you can finish down a run in one of the corries, and the descent on the mountain bike is good as well!

Return to the plateau

The large open slope to the West of Mitre ridge is the easiest route back to the plateau (at about NJ105015).  Make sure you don't cut up too soon behind Mitre Ridge, as there is another buttress below the plateau.  This slope is in itself is a great descent, particularly if you cut in below Mitre Ridge.  The 'Sneck' is the col between Bheinn a'Bhuird and Ben Avon.  If heading south, you may have to walk a fair bit of it, but it offers the least ascent back out of the corrie.

If you like really steep snow gullies, then this should be on your list. A steep offshoot of the "High Bay" ramp, it is tucked in behind "Squareface".  As you carefully approach the top, the ground just drops away from you.  The easiest entry to the gully is from skiers right, from a small snow arete perched above some rocks.  It may be useful to check out the entry from the top of "Squareface", or using a rope to get a look over the edge.

The head of the gully rears into a vertical wall of snowice.  You need to angle your slide in to drop below the steepest snow, but not drop too steeply, resulting in a loss of control.   Once established in the gully, the top 50m metres is fairly narrow and very steep.  As the angle eases in the lower section, it opens out a little before joining the ramp below "High Bay".

This is the easiest way through the cliffs of Garbh Choire, forming a wide diagonal ramp down the face.  It cuts below one of the most famous easy rock climbs in the country - 'Squareface'.  If the weather is clear, look at the top section.  Yes it's a square, and it's on a face, but without too much imagination, there is a face there...  In summer, this ramp is often used as a descent to Squareface.  In winter, it has the advantage in that it rarely cornices.  However, establishing that is possibly best done from the vicinity of the top of Squareface.

The run is steepest at the top (Grade I ground), but it's over in a couple of turns before you find yourself in a shallow depression known as 'High Bay'.   From there on, it's a wide ramp all the way to the corrie floor.  Be careful not to stray too much to your left on the way down, as there is a cliff below the ramp.

Notes: The short top section into the bay wouldn't be far off grade I
Related Links:
Descents of High Bay, Back Bay Gully and Coire na Ciche 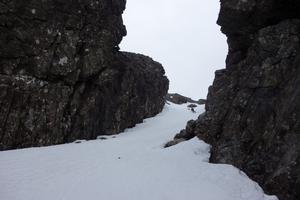