As with the other corries, either the Glen Quoich or Glen Slugain approaches are best, particularly with the use of bikes.  If using the Glen Quoich approach, and you want to return without walking round the hill, you can ascend the ridge onto A' Chioch.  From there, you can head down the Allt an t-Sneachda, which holds snow well (the clue is in the name!).  Alternatively, the most direct way is over the South Top (may be scoured and involve some walking), and aim for the steep stream line that descends just to the West of Bruach Mhor.  If you've approached from Glen Quoich, you will have seen this line, as despite being low down the mountain, it holds snow well in lean conditions.

A Gully and B Gully (both Grade I) on the South side of the corrie also look possible, and would give the greatest vertical in the corrie, but they are difficult to locate from above as they are often heavily corniced.  Both are fairly shallow, indistinct looking lines.

The most natural descent on offer in the corrie is the headwall from the lowest point of the plateau rim.  There are often long deep cracks present at the top of the slope in spring, but if you get the right entry point, you should avoid any cornices.  Below the entry point, there is an area of craggy ground, so it's best to cut back left towards the centre of the slope, and head down a shallow runnel which opens out to the corrie floor below.

Notes: The ground is probably in the region of grade I.

North Wall of A' Chioch

This face may be of consolation if you arrived in the corrie intent on steeper things, but unable to get into them due to cornices.  There are multiple options for descents, depending upon snow cover.  Three are marked, but as you can see from the pictures, more are possible.  Start from anywhere on the shallow col between the South Top and A' Chioch, or near the South Top itself.

All of them, with the right snow cover, are good descents, with ground comparable to what you can find on some Grade I gullies.  A good area to practice for steeper things, in a nice remote location.

Notes: Not steep enough to be graded, but no place for a fall.
Related Links:
May 2013 trip to Coire an Dubh Lochain

The Main Rake is the obvious diagonal ramp line at the back of the corrie, bisecting two sections of cliff.  Timing a descent when the cornices are amenable, and the rake itself is complete, can be tricky.  It has a tendency to thin fairly readily, while still sporting a sizeable mass of snow at the top.  There is a small chute at the Southern end of the snowfield (far skiers right), but the cornices are often huge here.

In a "normal" year, you should be able to gain entry to the line relatively easily, more or less above the rake itself once the cornices have melted/collapsed.  Once below the lip, the angle eases.  The rake itself is not quite a uniform slope, with slight changes in aspect and angle making for an interesting descent.

In April 2014, the build up of snow was such that the only entry that did not involve a drop off severely cracked cornices was at the far end (skiers left) of the hanging snowfield, and involved a very steep diagonal traverse back under the cornice onto easy ground.  This entry point was adjacent to some small granite tors.  You can make out the entry tracks in the main photo, just to the left of the bump above the right hand end of the hanging snowfield.  This entry is definitely a no-fall zone, and is not for the faint-hearted.  I elected not to do it, but Andy did!

Notes: If the cornice is built up, it will feel very serious for the grade. 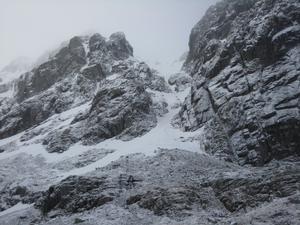