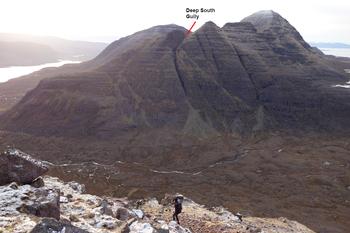 Beinn Alligin probably isn't a mountain that springs to mind when considering skiing, yet with the right conditions, as with any hill, there's something worthwhile to be found.  Beinn Alligin is home to one of the jewels in the crown as far as gully skiing goes in Scotland: Deep South Gully.

The excellent path into Coire Mhic Nòbuil allows for a quick approach.  Crossing the Abhainn Coire Mhic Nòbuil at NG882588, the path rises towards the Horns of Alligin.  Look for a small path to the right before the main path climbs steeply up onto the ridge at 350m (NG882602).  Follow the right branch (easy to lose at points), towards the Bealach a Chomhla between the Horns of Alligin and Beinn Dearg.  Deep South Gully is the first deep gully to pass below, hopefully with a tongue of snow protruding from the mouth of it.  Once you've had your fun, it's simply a case of retracing your steps back out, unless you decide to climb up and over Beinn Alligin for another ski (Coir nan Laogh possible).

There is one relevant Scottish Avalanche Information Service forecast for Beinn Alligin.
Torridon

With stunning scenery and constant interest, Deep South Gully is regarded as one of the finest Grade I gullies in the country by climbers.  As a ski descent, it seems somewhat improbable. Located between the first and second of the Horns of Alligin, the top of the gully is just below 800m and isn't backed by any form of plateau to collect snow.  The advantage of this is that it's unlikely to ever have a troubling cornice, but the disadvantage is how infrequently it is possibly in condition to ski.  However, in April 2018, when the rest of the mountain was quite free of snow, the gully was complete and then some, allowing a vertical descent of 350m.

It's best to climb up the gully prior to a descent.  Partly because it is actually an easier approach than scrambling over the first of the Horns, but also it gives you an idea of what is coming.

In descent, the gully starts from the col, with an open funnel shaped slope. giving you the chance to get a few warm up turns.  At the end of the introductory slope potentially comes your first difficulty.  A narrow section (possibly slightly icy) is to be negotiated.  A slight overhand in the opposite wall may give you some space to get turned around.  In 2018, there was a projecting lump of rock that appeared useful for holding onto to get turned around.  If it's still there, don't touch it: it moves!

Once pointing the other way, the next obstacle is immediately below.  Round about here is a chockstone.  In April 2018. this was buried, but there was an awkward icy fringe to negotiate.  However, on skiers left, there was a handly little bypass avoiding this, that allowed you to return just below it.  A few wider turns below bring you to a narrower section.  The build up will determine how easy this is.  We were lucky, and were able to ski down it, but much less, and it could mean a downclimb.  Below this pinch point, the gully opens up, and is much more straightforward.

Notes: At the upper end of the spectrum for Grade I 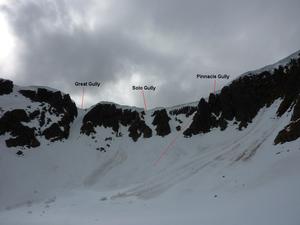