In contrast to neighbouring Coire an t-Sneachda, Coire an Lochain is small and enclosed.  The short buttresses that sit high above the lochan are home to many hard miixed winter climbs, separated by much easier gully lines.  The Couloir is the obvious ski descent, but there are rumours The Vent being descended (a very steep narrow slot to the East of The Couloir), and the right branch of Y-Gully gets talked about (to the West of The Couloir, usually topped by a massive cornice).  Both are likely to be utterly terrifying.

You have many choices, but the obvious start is the Coire Cas car park:

There is one relevant Scottish Avalanche Information Service forecast for Cairngorm: Coire an Lochain.
Northern
Cairngorms

The Couloir is a sought after descent, despite being short in length.  A significant feature of the descent is dealing with the Great Slab - a large area of granite that is often the scene of some specatular full depth avalanches in the spring.  Glide cracks often appear well in advance of this, and can be a hazard in themselves.

The gully doesn't actually start from the corrie rim, but 5m below it from a small saddle just to the West of the summit of Cairn Lochan.  This point usually offers a break in the cornice.  The short slope to the saddle is at an easier angle than the gully itself, but can feel exposed with the chasm of the Left Branch of Y-Gully on skiers left.  Despite being short, the gully is quite steep.  In good conditions, there should be plenty of room to manouver, but when relatively lean, it will be a lot narrower.

Once out of the gully, and you are in any way concerned about the snow on the Great Slab, stay hard right, almost to below The Vent, and head down to the lochan from there.

Notes: The gully is steep for Grade I, but short. 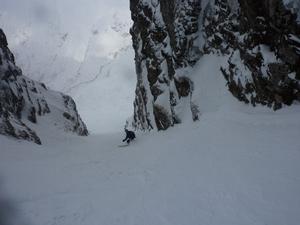